Vulnerability in our DNA: the work of Lyndi Sales

Contemporary culture deals with the trauma of airplane crashes in a very particular manner. Sense is imposed on the aberration that such events represent, usually through the application of narratives onto the tragedies. Yet, far from being truly therapeutic, such narratives usually involve predictable binaries that are reductive. Director George Seaton’s 1970 film ‘Airport’, based on a 1968 novel by Arthur Hailey, adopted such an approach, tacking a plot about a would-be terrorist onto his exploitative milking of extreme emotional situations. The effect of Seaton’s film was not actually to provide an adequate and cathartic explication of the emotional experience of such an awful event; rather the film functioned, like its slew of imitators in the burgeoning ‘disaster’ genre, to package trauma for palatable consumption by a global audience.

Similarly, Paul Greengrass’s 2006 docudrama ‘United 93’, a real-time account of events on United Airlines Flight 93 (one of four planes hijacked by terrorists in the USA on 11 September 2001) ultimately exists to affirm American heroism. The film, the first Hollywood production to lasso the narratives of the terror attacks of 9/11, tells the story of the crew and passengers on board this flight, who banded together to resist their hijackers. Though their attempts were unsuccessful, and the plane crashed into a field killing all 44 people on board, the event and the film have become emblematic of a certain type of mythic American ‘everyman’ valour in the face of the terrorist threat. Real or fabricated, his serves as solace to the families of those killed. Order, momentarily disturbed by threat from outside, is reestablished through the grafting of a traditional linear plotline onto an event or series of occurrences that in fact defy neat assumptions of good triumphing over evil.

The events around the SAA Helderberg aircraft disaster of 28 November 1987 saw a total of 159 people die. The subsequent trickle of information about this tragedy to the public generally and to the families of the deceased specifically, provided no such solace. The pall of opacity that still surrounds the Helderberg Disaster was certainly not expelled by the Ministry of Transport’s Inquiry into the crash: the Inquiry remained inconclusive, failing to ascertain the truth of a variety of claims about the disaster. These included that the aircraft was carrying flammable material in contravention of international prescripts, and that the ZUR tape that kept a 24 hour record of flight information was deliberately removed and possibly destroyed.

The culpability of the Apartheid government in the incident, primarily suggested by Dr David Joseph Klatzow who alleged that “Armscor’s zeal” in using the Helderberg to transport rocket fuel for the various wars in the region resulted in the crash, was also not conclusively established.

The complexity that marks the work of contemporary South African artist Lyndi Sales references the constellation of emotions around this terrible tragedy. Sales’ father was one of the 159 people killed in the Helderberg Disaster; the event happened when she was just fourteen years old. Much of Sales’ creative production as an adult artist has centered around the processes of coming to terms with both the loss of her father, and a sense of helplessness at the seemingly impenetrable mystery of the event.

Sales’ output inserts itself where the neatness of linear narratives and polarising binaries of good guy/bad guy, good country/bad country fail. Her installations and sculptures in paper, nylon, rubber and plastic physically and visually figure confusion. The leitmotif of incision, which creates constant interchange between negative and positive space and image, speaks eloquently of loss, pain and trauma, yet also of a therapeutic type of ownership of that trauma: Sales frequently transforms found objects such as lottery tickets, aircraft life jackets and safety information cards from aircraft seatbacks. Sales’ transfigured found objects are light years away from slick, ironic‘readymades’: they seem instead to map out emotional terrain of pain and perplexity. Often, they go further, becoming mini- monuments to the transience of life, utilising flight as a metaphor for limbo a moment of passing over between two states.

Limb, a work created from the nylon of a deconstructed life raft, expresses a certain human frailty: the flimsy positive strands of nylon that make up the shape of a leg are at once invoked and threatened by the negative shapes of the cutout areas. The very act of incising into the nylon, which has called into being the human limb, nullifies the function of the life raft, rendering it incapable of sustaining human life in the limbo before rescue. The fragmented leg floats decontextualised, all at sea, as it were.

How long can you hold your breath works in a similar way, but evidences a greater interest in viscerality. The images carved into each side of a life vest are the bronchial branches from the inside of human lungs. This links Sales’ act of cutting with surgical incision, an invasive act of excavating the body’s layers of skin and tissue, reinforcing the notion of the body’s infinite fragility. In fact, Sales speaks of the these works as dealing with the transference of solid form to something ethereal, matter to energy. This links to ideas posited by the Nkisi figures of the lower Congo, into which nails were hammered to release some of the power of the deity imaged. One senses that each one of Sales’ incisions into the life jacket releases some of the accumulated emotion associated with her experience.

The image of a human arm in the pair of Breathing Life works occurs in two manifestations: once in life raft rubber, and once in lottery cards. This use of Lotto (the brand name of South Africa’s state-endorsed lottery) cards introduces Sales’ employment of the notion of chance: yet, paradoxically the notion of good luck that attaches to lottery winning becomes reversed as Sales references the popular wisdom that one is more likely to die in a plane crash than one is to win the lottery, with somewhere in the region of one in 11 million chances. In fact, 1 in 11 000 000 chances became the title of her 2006/2007 exhibition at Bell-Roberts in Cape Town and Gallery Momo in Johannesburg.

Yet this use of lottery cards has ramifications beyond the particular details of Sales’ family tragedy: the lottery cruelly embodies the desperate hope held by many impoverished South Africans that a stroke of good luck will change their often tragic lives. Sales seems to suggest that, much like the unseen forces that worked to inject trauma into her life, so too the machinations of systems bigger than the individual seem to conspire to limit the lot of the already disadvantaged. 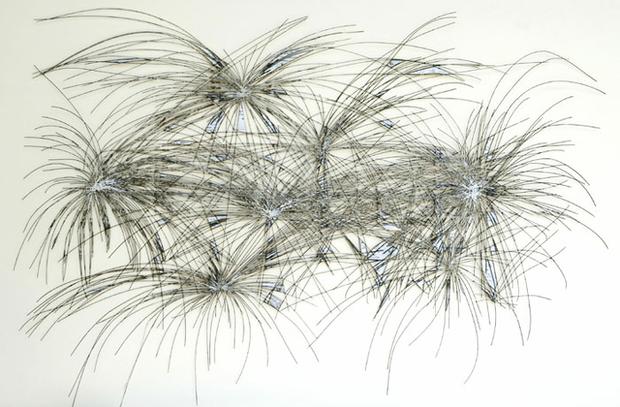 A work entitled Flight Path is created from a series of safety cards. Given the overarching subject of Sales’ work, Flight Path registers the futility of these cards, with their measured language and images of oddly calm passengers, in the face of very real and immediate crisis. Sales’ process of carving out networks of shapes from these objects seems deliberately perverse, denying the their communicative purpose in a manner that is at once destructive and whimsical. 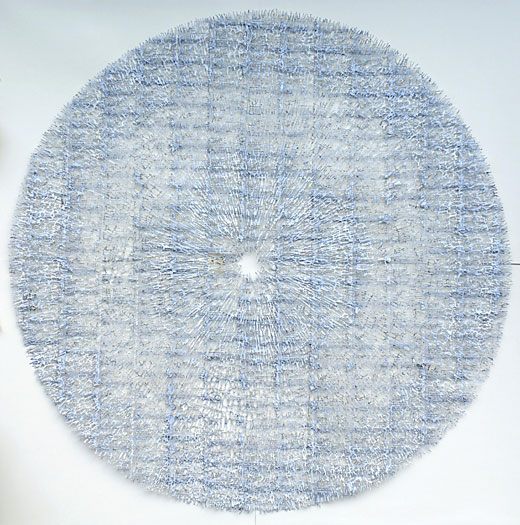 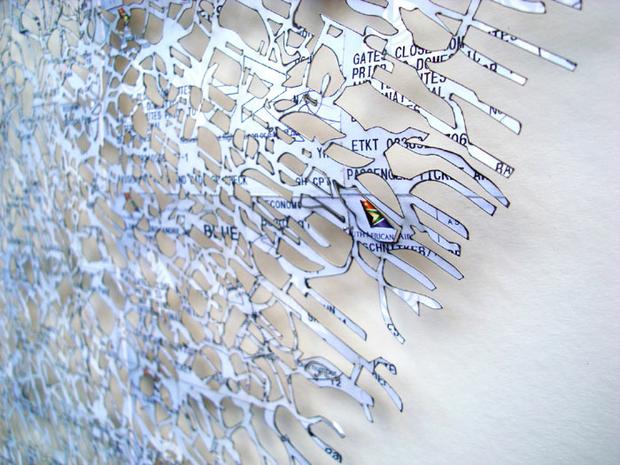 In a work entitled Shatter, Sales has carved an intricate radial configuration out of 159 boarding passes, pieced together into a large format circular shape. The final result is mandala-like in its meditative aura: it operates like a sedate explosion, working out from a hollow epicenter. Yet, even the most cursory thought into the function of a boarding pass reveals how strategic Sales’ choices of found objects with which to work are. On both domestic and international flights, one’s pass is virtually like currency, the means through which access to the plane is controlled and allowed. In Sales’ Shatter, however, access to he Helderberg, symbolised by her use of the same number of passes as there were people on board the plane, takes on a simultaneously ominous and tragic tone.

In this work, the notion of interplay extends beyond the physical of the negative and positive shapes, even beyond the existential concepts of life and death, onto a strata that begins to interrogate the artistic process. For Sales, artmaking is quite literally a superfine balance between creation and destruction. The works she makes straddle a divide between permanence and ephemerality, and seem to have a strangely powerful vulnerability that is compelling.

As a result of its round perimeter, Shatter is the work by Sales that seems most like it represents catharsis for the artist, as if the processes of its creation allowed the derivation of a degree of peace. Undoubtedly it is a peace that is hard-won: the uncertainty remains virtually contained in the DNA of this image with its profusion of shapes and blind alleys, and its creation unavoidably involved constant, repetitious incision, to the point where the cards are very near to states of collapse.

Yet one has to believe that this work, and in fact all of Sales’ work, contains the means to a meaningful, useful conception of trauma and healing. Like decal sheets from which all of the images have been removed, her works are confounding, necessarily frustrating, yet also endlessly evocative in the sense that what remains behind poetically registers that which has been removed.

Michael Smith is a Johannesburg-based artist and writer, and works as Managing Editor for ArtThrob.